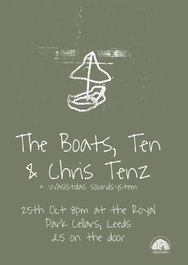 Hibernate presents The Boats, Ten and Chris Tenz at the Royal Park Cellars, 8pm on Tuesday 25th October. Entry just £5 on the door.

The Boats:
The partnership of Craig Tattersall and Andrew Hargreaves collectively know as The Boats enters into its seventh year. In this time they have released a catalogue of seven albums, four EP’s and have appeared on many compilations. The duo thought it was time to push the status quo and break the album cycle. 2011 will see the group perform their latest work live before an audience! The improvised piece entitled “Do The Boats Dream Of Electric Fritz Pfleumer?” will be performed through an intricate tape loop system offering more wow and flutter than ever before. The show will see the group present a poem to the magic of magnetic tape, dreams and the synth pallet of Greek hero Evangelos Odysseas Papathanassiou. As always the music will reflect a process that sees The Boats passing the experimental through a skewed pop filter creating a sound that uncovers a friendly more fragile side to the avant-garde. These will be special unique events not to be missed.

Ten:
Ten is a mixture of ambient, instrumental and electronic sounds crafted together with the help of Analogue keyboards, Guitars, Various Delay Pedals, Pro tools, MSP MAX, and a String Quartet all led by musician Dominic Deane. Ten have had the privilege to play around England, Europe and North America.

Was Ist Das Soundsystem will be on DJ Duties throughout the evening.

This entry was posted in other people's events, Past events and tagged 2011, Chris Tenz, Hibernate, Leeds, Royal Park Cellars, Ten, The Boats. Bookmark the permalink.