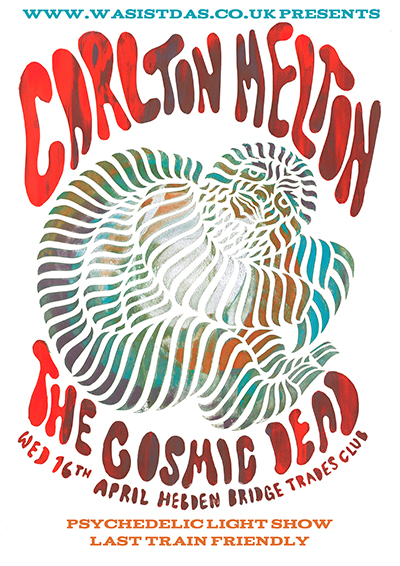 Back after blowing everybody’s minds in 2012, San Francisco’s finest bring back their uniquely heavy but mellow style of psychedelic rock to the Trades. They are back in Europe to play the Roadburn Fetival but are stopping by at their favourite UK venue to launch their new limited edition cassette “Live At The Trades” which they recorded last time they were here. There are only 200 copies being made so this could be your only chance to get a copy.

In support, making their Hebden debut, is a band we have been after ever since their debut album blew us away back in 2011. A regular fixture on our end of year lists and in demand all over Europe for their mind-blowing live show, we have been consistently wowed by each new release but this year’s “Easterfaust” (out on February 20th on Sound of Cobra records) just takes the hallucinogenic rock biscuit:

With such far-out sounds how could we not ask our friends White Rabbit to bring along their classic analogue psychedelic light show? I mean, it’d be rude not to, wouldn’t it?

We will be keeping it last train friendly, so hoping to get The Cosmic Dead on around 9pm and Carlton Melton on around 10pm in time for last trains to Manchester at 11.28pm and Leeds at 00:04pm. Repairs to the tunnel near Hebden are complete so these will be real, direct trains not coaches!

Tickets on sale now at the venue, Jumbo Records and online from HERE

This entry was posted in Our events, Past events and tagged 2014, Carlton Melton, Hebden Bridge, The Cosmic Dead, Trades Club. Bookmark the permalink.