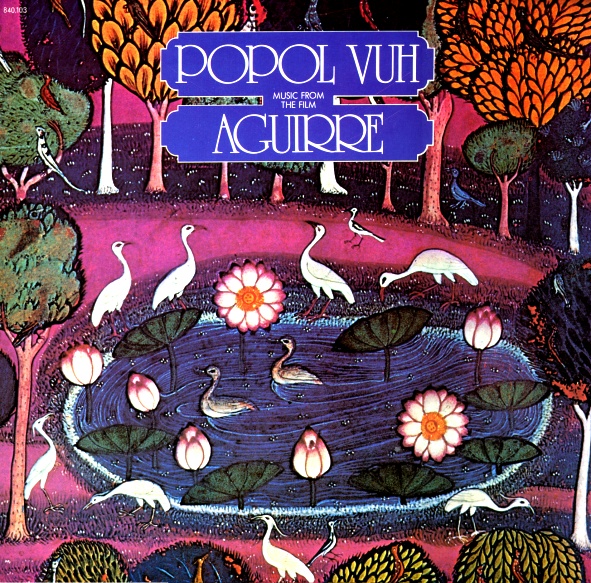 When I first started collecting the music of Popol Vuh, I skipped over their soundtrack work and concentrated on their “regular” studio albums. My logic for treating their soundtracks as poor relations was I had seen ‘Aguirre’ a few years earlier on TV and could not remember the soundtrack. I assumed it was probably very discrete and minimal.

Fast forward a couple of years and ‘Aguirre’ comes out on DVD and on second viewing, the soundtrack comes out of my speakers like the heralds of the gates of wonder. That was it, soundtrack obtained.

In their regular work, Popol Vuh make music veering somewhere between Eastern devotional music and Western classical. Yet when they did soundtracks for Werner Herzog, they allowed the films to enter their music and create something different. Something less spiritual occupies them, something almost darker. It is fair to say that the partnership of Herzog and Popol Vuh is one of cinemas great director and composer relationships

The overriding feeling emanating from their ‘Aguirre’ soundtrack is a sense of awe. Their musical palette moves away from traditional acoustic instruments and into strange electronic soundscapes that still inform so much of the new music that comes through my letterbox.

The main Aguirre theme is perhaps the most memorable piece of music on here with its weird electronic choir effect. It opens the album and the film, returning at the ends of side 1 in a reprised version and sneaking in very subliminally about halfway through the harsh, abstract electronics of ‘Vergegenwärtigung’.

Just to confuse matters, though, this is not all music from the film nor is it all the Popol Vuh music from the film. It was not even all recorded at the same time with the same line-up. I’m pretty sure neither “Morgengruss II” nor “Agnus Dei” were in the film, being jaunty, guitar-led celebrations more akin to the fare found on the later post-electronic albums. 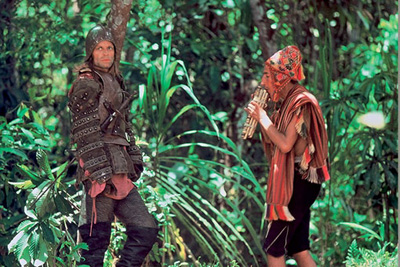 A special mention should probably go to the SPV CD reissue which gives the main them a third reprise with the bonus track ‘Aguirre III’ which features a seven minute version accompanied all the way through with some masterful, heavy percussion from Holger Trülzsch. The ZYX CD version has a three part bonus track called “Spirit of Peace” but although it lists “Vergegenwärtigung”, in it’s place are three tracks “Wo bist Du?”, “Auf dem Weg” and “Die Umkehr” which is how side 2 of the rare  1982 Kosmische Muski vinyl re-release played.

There are also some confusing configurations of the album from Japan which are really just compilations with only one track off the original ‘Aguirre’ despite using the same artwork. Whatever version you end up with, though, you have a classic bit of atmospheric electronic experimentalism of the kosmische school. Just don’t hurt the spider moneys, OK?