I’m a fan of a lot of Manuel Göttsching’s music – but Manuel, c’mon! Falling in love isn’t enough to excuse the mostly goofy tunes on this record.

“Laughter Loving” sounds as if it was recorded to advertise low-fat yoghurt or maybe as an ambient music for Tele-Gym? The next tune (Nomen est omen): “Day Dream”! Alright, we get it, Manuel! It’s all rainbows & Rosi! And yes, she was a beautiful model from Munich we all might have wanted to spend the night with or a lazy sunny afternoon. But doing a record? Seriously?

On “Starring Rosi” Harald Großkopf plays drums on a few tracks and a bit of bass & percussion is added by Dieter Dierks (who also produced that little gem). The rest is left to Rosi and Manuel – doing the “Cosmic Tango”, for example! Or – even better: “Interplay of Forces”! Hilarious bi-lingual lyrics along kitschy cosmic sounds!
To be fair: A certain amount of fun and daftness was/still is attached to a lot of the records put out under Rolf Ulrich Kaisers patronage, but next to “Gille’s Zeitschiff”, “Starring Rosi” is the most bonkers. And of course it’s not all up to Rosi… Maybe it’s the other way round: The fact that Rosi’s been providing some ridiculous lyrics and whatnot makes the record bearable! Who knows (I don’t want to) what Göttsching would have done left alone on his own!
To cut it short: if you’re a collector you might already own a copy anyway, if you’re heavy into Krautrock and manage to score a (relatively cheap) copy – buy it, why not? From time to time it’s fun to listen to “Starring Rosi” – it is an exhilarating experience, actually. But if you’re short on money or you want to keep your collection of records at a reasonable size: skip this one. 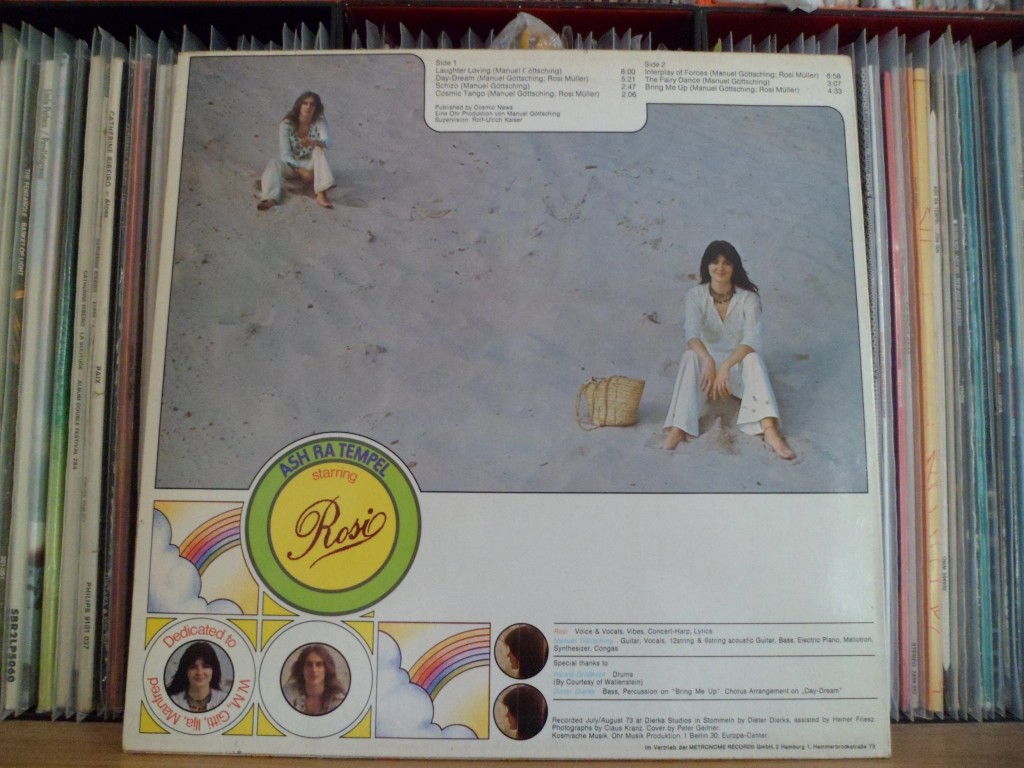